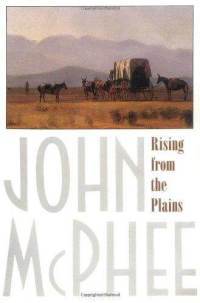 Rising from the Plains

This is about high-country geology and a Rocky Mountain regional geologist. I raise that semaphore here at the start so no one will feel misled by an opening passage in which a slim young woman who is not in any sense a geologist steps down from a train in Rawlins, Wyoming, in order to go north by stagecoach into country that was still very much the Old West.So begins John McPhee's Rising from the Plains. If you like to read about geology, you will find good reading here. If, on the other hand, you are not much engaged by the spatial complexities of the science, you could miss a richness of human history that has its place among the strata described. Sometimes it is said of geologists that they reflect in their professional styles the sort of country in which they grew up. Nowhere could that be more true than in the life of a geologist born in the center of Wyoming and raised on an isolated ranch. This is the story of that ranch, soon after the turn of the century, and of the geologist who grew up there, at home with the composition of the high country in the way that someone growing up in a coastal harbor would be at home with the vagaries of the sea. While Rising from the Plains is a portrayal of extraordinary people, it is also a history of the landscape around them, where, with remarkable rapidity, mountains came up out of the flat terrain. Gradually, the mountains were buried, until only the higher peaks remained above a vast plain. Recently, they have been exhumed, and they stand now as the Rockies. Rising from the Plains is John McPhee's third book on geology and geologists. Following Basin and Range and In Suspect Terrain, it continues to present a cross section of North America along the fortieth parallelâ€”a series gathering under the overall title Annals of the Former World.Description from the first-edition dust jacket (1986).